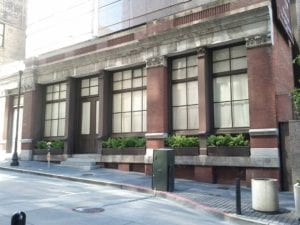 The New Mint
The Old Mint

If anyone has ever taken a tour from Bob Smith, then you have definitely heard about what he believes to be the biggest conspiracy theory of San Francisco: The San Francisco Mint. Said to be just a building that makes coins, it is arguably the most protected building in San Francisco, of which you never see anyone ever go in… or come out. The last recorded tour that was allowed at the New Mint was May 15, 1987 and, since then, no tours or events have been held at this location. Before the current Mint was established, there were two others that came before it.

The original Mint was established in response to the 1849 Gold Rush in order to receive gold deposits from miners. The first San Francisco Mint officially opened in 1854 and within the first year produced 4,084,207 in gold coins. At the rate that they were going, the first Mint was quickly outgrown and relocated to a new location in 1874 which still stands today as a National Historic Landmark. The second Mint is often referred to as “the Old Mint” and, more commonly, “The Granite Lady”. The architecture for this building was inspired by the Greeks yet the nickname given to it is misleading seeing as most of the building is actually made of sandstone, not granite. The architecture has been celebrated seeing as it was one of the only buildings that completely survived through the 1906 earthquake and the fires that ensued. Thus, the reason the building is celebrated as a Historical Landmark.